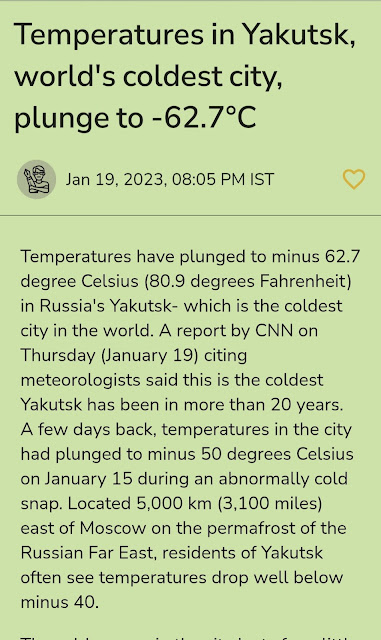 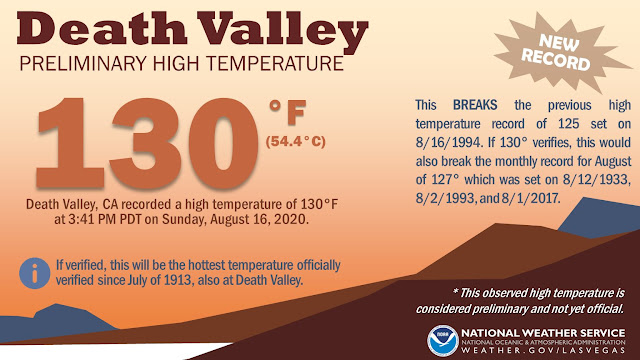 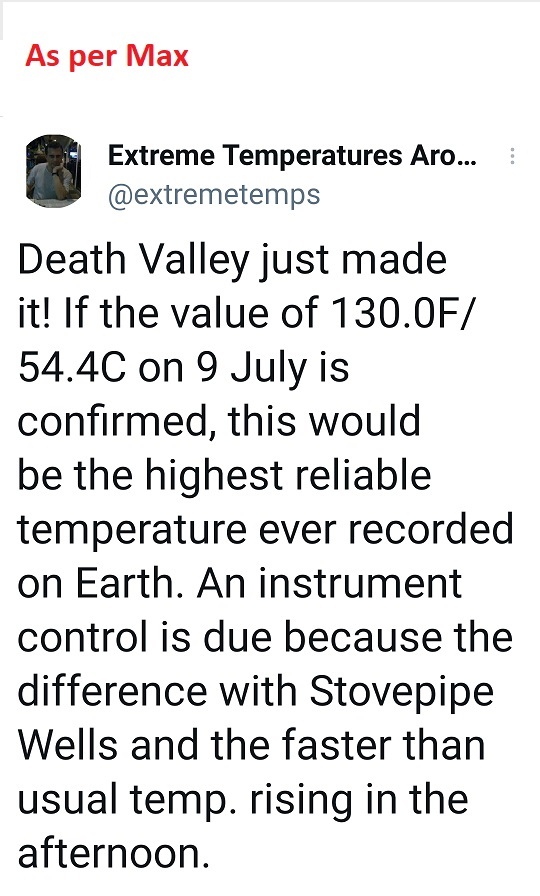 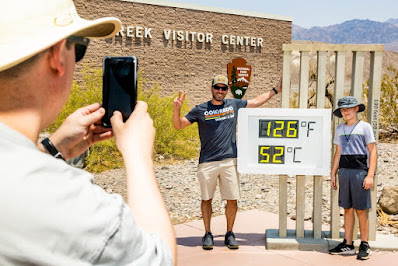 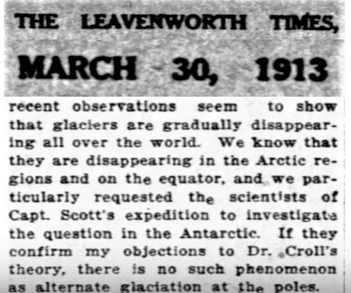 In addition to the excessive heat seen across the US that year, there are newspaper articles from that same time period suggesting high heat may have taken place in others part of the world.  One such article (excerpt shown above) written on March 30, 1913 reported that “recent observations seem to show that glaciers are gradually disappearing all over the world”.

From "Whatts up with That" 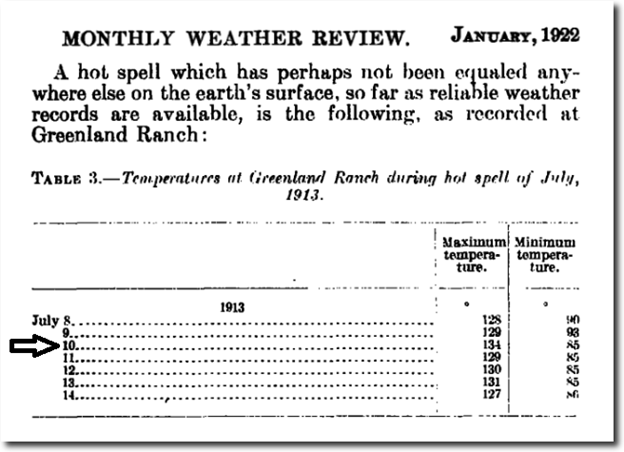 56.6c...
*On July 10,Temperature recordings at the Greenland Ranch weather station in Death Valley, California during the intense heat wave of July 1913.  This excerpt about the record-breaking heat wave comes from an article posted during January 1922 in the meteorological journal Monthly Weather Review which is still in publication today. Source: NOAA 1913, Death Valley, California reached an amazing 134 degrees...56.6c the hottest temperature ever reliably recorded in a year with many remarkable weather events.
The high temperature in Death Valley, California on Friday will come close to 120°F, but this is still well short of the all-time record there that occurred way back in 1913. On July 10th, 1913, the weather observer at Greenland Ranch in Death Valley recorded a high temperature of 134°F One hundred and seven years later, this is still the highest air temperature ever reliably recorded on Earth. In addition to this all-time and worldwide high temperature record, the year of 1913 produced numerous other extreme weather events.
The intense heat of July 1913 in California was not the only extreme heat measured that year in the US.  There was a widespread heat wave in June of that same year across the eastern half of the nation which resulted in many readings above 100°F.  In fact, NOAA’s official temperature records still cite June 16, 1913 as the hottest ever on a nationwide basis for that particular date.  In addition to the excessive heat seen across the US that year, there are newspaper articles from that same time period suggesting high heat may have taken place in others part of the world.
On September 12th, 2012, the WMO officially re-certified the 134 degree reading of July 10th, 1913 at Death Valley, California as the all-time highest air temperature ever recorded on Earth after evidence surfaced suggesting the Libya record of 136°F was based on a reading from a bad thermometer that was placed in the wrong place (near asphalt) and read by an untrained observer

February 8th 2020
The temperature in northern Antarctica hit nearly 65 degrees (18.3 degrees Celsius), a likely heat record on the continent.
The reading was taken on Thursday, 6th February 2020. at an Argentine research base and still needs to be verified by the World Meteorological Organisation.
“Everything we have seen thus far indicates a likely legitimate record,” Randall Cerveny, who researches records for the organisation, said in a statement.
18.3°C! - new highest temperature recorded for continental , yesterday at Esperanza Base, the northern tip of the Antarctic Peninsula, 63°23′S; previous record was 17.5°C in 2015 also at Esperanza
; records began at the station in 1961, pic Nestor Franco 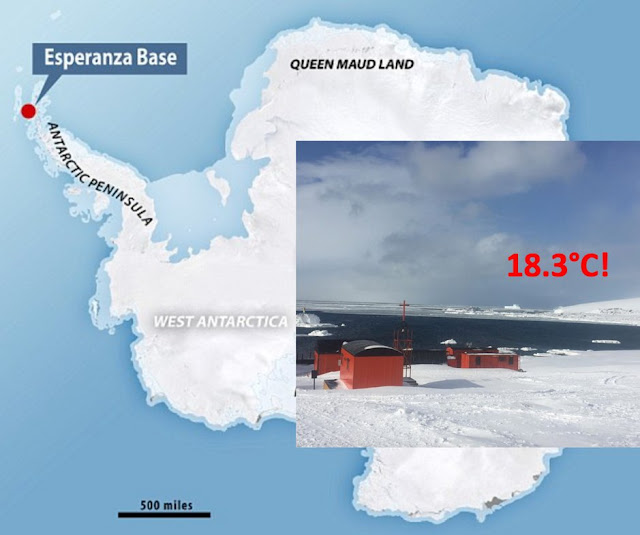 Greenland just set a new all-time record low temperature. Not only for January 2, not only for the entire month of January, not only at Summit Station, but for anywhere across the island, and for any month of the year.
Summit Camp, also known as Summit Station, is a year-round research station on the apex of the Greenland Ice Sheet. It is located some 10,500 ft (3,200 m) above sea level, and it’s data is often cited by climate alarmists claiming “Greenland Is Melting Away Before Our Very Eyes” and other such nonsense…
Adding to the list of temperature measurements those alarmists will likely ignore -or won’t even get to hear about given the mainstream media’s warm-bias- is Summit Camp’s preliminary low of -86.8F (-66C) set at 11:13 PM on January 02, 2020.
The reading, once confirmed by the DMI, will enter the books as Greenland’s coldest-ever recorded temperature-not only at Summit Camp, and not only in January, but of anywhere across the island, and of any month of the year.
From https://www.sott.net/article/426761-Greenland-just-set-a-new-all-time-record-low-temperature


Thanks to tomOmason and Benjamin Napier for this link

Port Augusta creates a record of the Highest temperature for a place within 5 kms from the sea..recording 49.5c.
Also 49.1c recorded at Red Point Rock, 100 metres from the sea....
Info from Max Herrera

One town in northwestern Australia, Marble Bar, has now had 22 consecutive days of temperatures above 40 C, at one point almost reaching 50 C.

The north shore of the Hawaiian island Kauai may have set a national record for the most rainfall ever in a 24-hour period, according to preliminary data. Rain gauges in Waipa, about a mile west of Hanalei, recorded 49.69 inches (1262 mms) on April 14 and 15.
Intense rainfall cut a path through Hanalei, which received 28 inches (713 mm) of rainfall. The U.S. Army and National Guard airlifted more than 220 people from the Haena and Wainiha areas after Kuhio Highway, the only road that leads to them, was blocked by landslides. Floodwaters carried off bison, some of which were rescued from the ocean. Ocean water around Kauai was an unusual shade of orange for a week after the storm because red–orange clay from the mountaintops was swept into the water by the rain.


The torrential rain began on April 12, when an elongated area of low pressure disrupted the normal flow of the northeast trade winds above Oahu. This caused heavy rainfall as the system strengthened and moved slowly over Kauai. The rain event lasted through April 19.


15th February 2018
Giant hail fell Thursday in Argentina. (Victoria Druetta)The hail started around 4:30 in the afternoon in Cordoba, Argentina. At first, it was “tiny and fun,” but then it changed. Hailstones larger than tennis balls began to fall from the sky, eventually growing to mammoth size.Victoria Druetta hurriedly snagged one giant stone that fell in her neighbourhood of Carlos Paz, snapped a photo of it and placed it in her freezer.“The hail lasted 20 minutes. It was kind of scary,” Druetta recalled. “It hit and then exploded and then melted some. It was probably even bigger.” 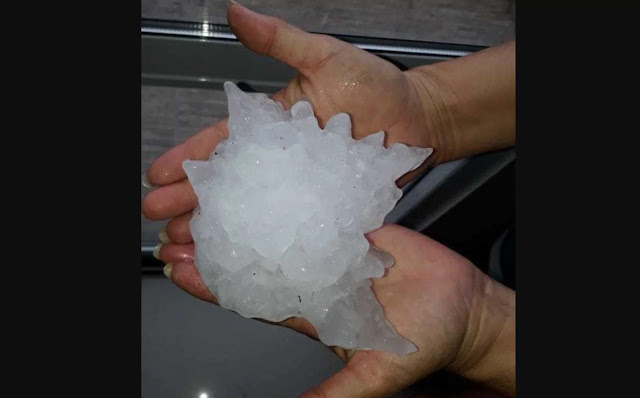 The stone looks to be up to 18 centimetres in diameter — 7.1 inches — at its largest width, which could be a record for the Southern Hemisphere. The stone’s unusual size made it difficult to measure because of its bumpy surface and because it melted a bit before Druetta put it down on a tape measure.


Highest night (min) temp ever recorded in the world :

Loma,montana(US).. is the location of the most extreme recorded temperature change in a 24-hour period in the United States. On January 15, 1972, the temperature rose from -48 °C to 9 °C; a dramatic example of the regional Chinook wind in action.....
(source: wiki article on loma; ref. no. 2  submitted by Rohit Aroskar)

A massive heat wave burning much of Australia has sent temperatures and fire danger soaring.

9th Jan 2013, highest temperatures of up to 49c, or 120 F, were to be found over the hinterland of Western Australia, the nation's huge western state, but with readings still well above 40c (104 F) spread over much of the eastern state of Queensland.

Hobart too broke its highest record when it measured 41.8c.

In Western Australia, readings on 9th Jan 2013 topped nearly as high as the vast state's all-time maximum temperature of 49.8c, or 121.6 degrees F.
The hottest spot, was Red Rocks Point, which soared to 48.6c, or 119.5 degrees F. Red Rocks is located in the southeast of the state, right along the chilly waters of the Great Australian Bight.
Next in line was Eucla, which also lies near the Bight, barely inside the border with South Australia. Eucla reached 48.2c, or nearly 119 F.
In neighboring South Australia, Nullarbor registered 46.8c, or 116.2 F, on 10th Jan.
Deep within the Nullarbor Plain, Forrest registered a sizzling 47.9c, or 118.2 degrees F.
Interestingly, Forrest shares the Western Australia all-time highest temperature of 49.8c -- 121.6 F -- which was reached on Jan. 13, 1979, according to the Australian Bureau of Meteorology (BoM) website. Also in 1979, but on Jan. 3, Mundrabilla Station topped at 49.8c.

The highest temperature ever recorded in more than 150 years of weather history in Sydney is 45.3c (113.5 degrees F), the Australian Bureau of Meteorology (BoM) website showed. For the airport, the historical top is 45.2c. This year it has topped 42c.

7th January, 2013, Hottest Day in History for Australia
Heat-weary Australia has registered its hottest day, on Monday 7th January, 2013, meteorological readings have shown.
Monday 7th Jan, was called the "hottest day on record" after the Australian Bureau of Meteorology (BoM) calculated a national average high temperature of 40.33c (104.6 degrees F), the Australian ABC News website said.
The single average temperature was compiled from between 700 and 800 daily readings spread across the country, the BoM's Dr. Donald Jones said.
The former record high, set in 1972, was part of a comprehensive Australian weather record that dates back to the start of 1911.
Inputs from Jim Andrews (Accuweather) and Austrailia Met Bur.

First Time a New Colour added !
The giant and record heatwave in Australia has forced the meteorologists to further add 2 new colours, upwards of 45c and 50c in its temperature charts...they have now added, at least till the heat is on..deep purple and pink as the 2 new colours...

This is probably the first time any country has added and re-drawn their temperature charts to take into account temperatures likely to tip and go off the scale hitherto applied and made...Says Bob Ward, of Grantham Institute for Climate Change, London, "Its a measure of the severity of the heat wave...that the National Bureau is struggling to re-calibrate its montoring methods by adding 4c and 2 colours to its scale.."


Dallol, Ethiopia With an average daily temperature of 34.4 °C (93.9 °F),
it should come as no surprise that these days the city little more than a ghost town.

Atacama Desert, Chile It is so dry here that between October 1903 to January 1918

which is the longest rainless period ever recorded.


per hour and an average annual wind speed of 80 kilometres (50 mi) per hour,

Commonwealth Bay is the windiest spot on Earth.